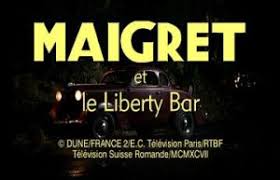 Chief Inspector Jules Maigret is plucked from his Paris office on the Ile de la Citè and put on a train to Antibes in the far south.  He arrives from a grey and wet Paris, exhausted by the journey, to a blinding sunshine and the gusting mistral as though landing on another world. He is dazzled, disoriented, and overdressed, and not particularly happy to be there. He finds the local inspector a tiresome puppy underfoot and sidelines him, leaving him petulant but obedient.

Monsieur Brown, hero of the Resistance, has been murdered and someone in the national government wants a quick and clean resolution that does not open old wounds. To investigate Maigret sheds the puppy and immerses himself in Brown’s milieu, and what a milieu it is.  There is a rather grand seaside villa, all that remains of Brown’s pre-war fortune when making money seemed important to him, now occupied by a mother-daughter combination, one being his mistress, and at times Maigret is not sure which, or even if both. Inside the villa it is a dump: the three lived in a few rooms, which had not been cleaned or tidied since the Liberation.

After his slow and patient questioning, the resident women say that Brown went off on holidays of three or four days every month, claiming to have no idea where he went or what he did, though he always returned with some money to live on the for the next month.

The local puppy-plod had settled on these two residents as the culprits and went no further but the lugubrious Maigret sets out to retrace and re-live the last of Brown’s short holidays. In nearby Cannes he finds the garage when Brown parked his car during these sprees, and then he bar hops in the neighbourhood until he finds the Le Liberty Bar, which like Brown fell into dilapidation after the war. Dark and seemingly empty, Maigret walks through the bar and into the kitchen to find the occupants who matter of factly offer him a seat at the table where they are just finishing lunch and he joins them, sitting where Brown sat, he learns, for it is here that Brown spent those days away. The proprietor is an older woman whose sole tenant is a young prostitute. At times others, like a waiter from the casino, come by for a drink or a meal and likewise sit at the table in the back like family.

Soon Maigret, still befuddled by the constant long hours of sunshine and the disturbance of the mistral, slowly acclimatising to the warmth of the Midi, goes into orbit around the Liberty Bar and slowly unpicks the stories of each of its inhabitants.  Maigret is unhurried, annoying his impetuous colleague who wants to arrest the two residents of the villa, but Maigret stalls. He probes occasionally, but mostly watches and listens. Pascale Roberts as Mado, the owner of the bar, gives a superb performance of increasing complexity. She differs from the woman described in the novel but who cares.

Brown was Australian and his family intrudes into the affair in search of a will for it seems there is a fortune (from the sheep’s back) tied up in a business which provided Brown the monthly income he collected on his away-days. This seems a promising lead and Maigret examines it.  Another red herring is the Bar’s prostitute and then her pimp.  But whatever road Maigret takes it always leads back to the Liberty Bar.

There is much eye-candy of the Riviera. Finding the film diverting, I wanted to read the novel and ordered it on my Kindle while watching and started to read it later that night. Is that convenient or what!?  The script sticks very closely to the text, though there is more explanation on the page than on the screen.

Such a change of pace from AmerBrit shouting and shoot ‘em ups that pass as mysteries. The placid Cremer moves at a snail’s pace, studies one scene from several angles, and soaks up the ambience in silence. Needless, to say some of the addled commentary on IMDb finds this ruminative approach inert, whereas I find it inviting. Among the many incarnations of Maigret, Cremer ranks high. Moreover, these are lavish productions with plenty of enhanced sets and artefacts of the Post War era. For the interiors the rooms are fully furnished; the automobiles are the real thing and so are the clothes. This story has been filmed at least three before according to the IMDb.

There is also an absence of the cheap cynicism that substitutes for thought in so many krimis. If shouting is the Amer disease in cop shows, the Brit disease is cynicism in which everyone is evil at heart except the paladin, think saintly and sanctimonious Christopher Foyle or Vera Stanhope who are both holier than all other thous. In contrast, Maigret meets many ordinary people who do not all harbour deep and very dark secrets and he gets to know and like some of them, including some thieves, pimps, and lowlifes who eke out a living doing little harm to others.

Another BritAmer crutch missing from the Maigret screenplays is the interfering, pettifogging, incompetent superior getting in our hero’s way.  This trope has been worn so thin it is see-through and yet remains commonplace. Indeed, it has spread to krimis beyond the English language. The otherwise admirable Martin Beck Swedish series has featured a number of such cardboards.  Regrettably, I note this stereotype appears in one of the Maigret episodes.

Nor is Maigret always right. He makes mistakes, he cannot always find the decisive evidence even when he is certain what happened, and in at least one of the novels he is stymied and gives up the investigation without a conclusion, thinking that maybe later something will emerge and he can start again.  Equally, he does not always have the last word. In one of the stories when he is questioning the widow of a man just murdered, he says to her that her husband was engaged in a crime. She shows him her Auschwitz tattoo and say ‘That is a crime, Mr Policeman!’  That the husband was fencing stolen jewels was nothing; rebuked, Maigret went silent. (Yes, he did go the morgue later and find a similar tattoo on the cadaver of the husband.)

This is episode 2 of season 7 of the series that ran from 1991 to 2005 with Bruno Cremer in the eponymous role. There are 54 episodes in total. I have about half of them lined up on the Plex server. (The others aren’t available at this time.) The original plan had been to complete the oeuvre of all 85+ Simenon stories featuring Maigret, instead time and tide caught up with Cremer from all that pipe smoking and throat cancer killed him.  It has a parallel in the effort to do the complete Sherlock Holmes with Jeremy Brett which was likewise stymied by the disintegration of the lead.